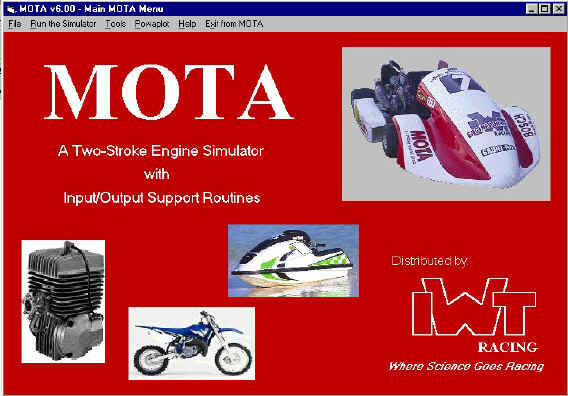 The latest MOTA version 6.30 is an evolution of the V6.10 that includes some fabulous new tools.
Power/Torque Curves Cursor Bar
The display of Power/Torque curves has been enhanced by the inclusion of a vertical cursor bar which extends over the entire height of the plotting area and whose position can be controlled by the mouse. Where the bar intersects each curve a horizontal cursor is drawn and, to the right of the plotting area, the corresponding power and torque values and the engine speed are displayed.

Additions to the Expansion Chamber Construction Utilities
The Expansion Chamber Construction utilities have been extended considerably and are now accessed under a separate item on the Main MOTA Menu. A sub-menu offers the two selections "Constructing the Development Pattern of a Cone" and "Printing the Development Pattern of a Cone". It is the options provided under the second selection which have been added to MOTA. You can now print the development pattern of a cone and this may extend over several A4 pages. Of particular note, you can produce the pattern of a cone having either end or both ends angled to the cone axis. A set of explanatory diagrams with text can be displayed. You may also define a single straight cone and print the patterns of each of the pieces which, when welded together, will provide an equivalent bend section. The number of pieces and the overall bend angle are entered through the keyboard. A MOTA engine data file may also be accessed and the pattern of each section of the expansion chamber printed. Alternatively, any one section may be selected and patterns suitable for the construction of an equivalent bend section printed This new feature allowing creation and printing of Expansion Chamber sections

We now have a simple 2 stroke expansion chamber design program.FREEdownload here
This program is not a part of MOTA,  but it has been put together by the same engineers as a starting point for those wishing to begin from scratch.  It calculates the dimensions for both double and triple stage diffuser expansion chambers from a few basic engine dimensions.  The information used in the program's calculations was taken from the books â€ËThe Basic Design of the Two Stroke Engineâ€â ¢ and the book â€ËDesign and Simulation of Two Stroke Enginesâ€â ¢; both books are written by Professor G.P. Blair of Queens University Belfast, and published by the Society of Automotive Engineers.  You are well advised to read at least one of the books mentioned above, since they contain the authorâ€â ¢s academic lifetime of knowledge on the two-stroke engine.
There are several coefficients used in the design of the expansion chamber â€â these are a function of the engineâ€â ¢s state of tune. Those used in this program  have been chosen for petrol engines, and are in the range 50cc up to about 500cc per cylinder. It is doubtful these formulae would work on small capacity glowplug engines, since the exhaust gas temperature is much lower, and the engine speed is much higher.

How it all began.......
MOTAÃâÂ® is the brainchild of Dr Julian Van Leersum, mathematics graduate from Monash University in Melbourne, Victoria.  He is of Dutch/Swiss parentage, but now permanently resident in Australia.

With the successful MOTAÃâÂ® software, Dr Van Leersum has managed to combine his professional interests in computing & mathematics with his enthusiasm for karting and motorcycle racing.

"It occurred to me that most home tuners cannot afford the expense of hiring time on a dynamometer to check the viability of adjustments or special parts" said Julian, "yet many people these days have a home computer which could easily run a suitably designed tuning programme."

"Although there is really no shortage of Books on the subject of 2-stroke tuning and preparation, I knew that an active software programme would be able to offer so much more."    So, this is how MOTAÃâÂ® was conceived.

MOTA is an engine simulation program suitable for everyone from the enthusiast to the university researcher - from the beginner racer to the professional tuner. See testimonials. You can test your own engine and then re-test and compare your modifications - or build your ultimate engine right on the screen. Millions of fluid and thermo-dynamic calculations are made by MOTA representing the conditions inside your two-stroke engine throughout it's complete operating cycle.

No previous knowledge of the two-stroke cycle engine is required - just input the required data and then run MOTA to set in motion this powerful process. Test your own theories on porting and exhaust pipe design; explore the limits of various intake methods; or just look for the highest power output from your own engine.

MOTA will accept a single-cylinder design, which will also cater for many multi's where 2, 3 or more cylinders of the same basic layout are repeated. Easy-to-operate, accurate and hours of fascinating results to enjoy! Excellent graphics you can analyse and compare. MOTA's "Two-stroke Dyno" will give you and your PC the equivalent of many experts knowledge.

MOTA and it's related set of programs have been developed to simulate the performance of high-output single cylinder two-stroke engines. It will simulate one of the cylinders of a multi-cylinder two-stroke engine provided that the cylinders are identical in layout and dimensions and each cylinder has a seperate exhaust and induction system. It allows simulation of engines with reed-valve, rotary-valve and piston port timed induction systems. Simulation of engines with either a box-silencer or an expansion chamber is also possible.

Because MOTA solves the equations describing the conservation of fluid and thermodynamic properties throughout an engine, it requires specification of the full engine geometry. This is accomplished through a menu driven environment, which prompts you for the required dimensions which are easily entered via the keyboard.

The output from MOTA is provided in two forms; a file, which summarises the engine geometry and performance, and a graphical interface which allows you to plot the various performance variables. The output file and these plots can be printed if you have a printer connected to your computer.

How MOTA works for you
The strength in MOTA lies not so much in it's ability to predict accurately the performance of an engine, but in it's ability to allow evaluation of two different engine configurations. For example, if you have the MOTA produced power curve for an engine, and you want to see if modifying one of the exhaust pipe dimensions will increase or decrease power, then you can change the particular dimension and re-run the MOTA simulator. Comparison of the new power curve with the old will allow you to determine whether or not the change will be worth making.

Where is MOTA different to other computer programs and tuning manuals - and what can it do?

So how does this help you?
Most everyone will have an actual engine that they wish to play with, or make perform better. MOTA can do that easily and quickly. It does not trouble you with the in-depth why's and wherefore's of two-stroke engine design theory - you are not trying to build an engine from scratch. You can do one alteration, or many, and MOTA works with that.

Some karting race results with MOTA.
The current IWT "MR1" pipe for long circuit karting in the 100cc Non-gearbox class was designed using MOTA. -- and it won the 2001 National Superkart Championship for our own team member Michael Rogers. It is an evolution of all of our earlier designs, that for the past 5 years have seen multiple state championships come our way, and at most meetings qualify at the front of the pack !!

The Mallala lap record for the 100cc Yamaha heavy class is now in the possession of Ian Williams, using this pipe as designed with the aid of MOTA.

The late model crankcase reed induction Yamaha YZ80 engine was "tuned" for Superkart racing using MOTA. to redesign the porting and design a new reed and exhaust system -- before the first engine had even been run !! From the first time these engines hit the track they have been winning right across Australia.

The exhaust design for this has been used to win multiple State and National Championships, as well as the reed design now being used as "the" setup for all karts run in this class across Australia today. 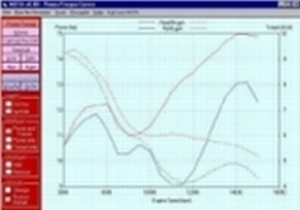 NEW - NEW Now available a small program with port angles versus piston displacements that you can input your own data and print out an A4 page with the results. This will help with setting up engines for classes like AKA Clubman or National with the KT100 Yamahas. Download/Read about it here ..

PURCHASING
AUSTRALIA $A261.50 inc GST - POSTAGE PAID within Australia
OVERSEAS. $251.50 AUD Airmail POSTAGE PAID Exported to most Countries
(For Cost In Your Currency Click ON Amount)